I discovered task cards a few years ago. I was amazed at their effectiveness. Students who will shut down (understandably) at a worksheet of 20 problems will happily get a comparable amount of practice working one problem at a time, particularly if they can work with a partner and check their answers as they go (hurray for QR codes!).

I've used task cards in a few ways, including scoots (not my favorite) and through the app Classkick, but I've wanted to try Speed-Dating Math-ing for at least a year. I was just never sure how to make it work for ME.

I read this blog post that made the most sense to me, and I finally took the plunge (disclaimer: Randi explains the process much better than I do, so please read her post!).

I tried speed-math-ing with my Pre-Algebra kids first. My two collaborative, inclusion Pre-Algebra classes are small, so I set up two sets of 8 desks in the room. One reason I decided on two sets was to allow for a bit of differentiation; students in these classes work at vastly different speeds, and splitting them up would allow students to work at a pace comfortable for them.

A couple of days after Pre-Algebra, Algebra 1 did the same activity with the same cards. 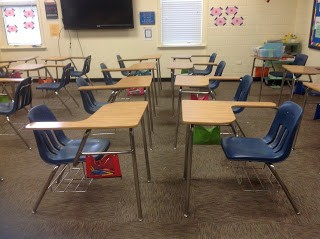 I started with a brief, probably inaccurate, description of speed-dating and added that we were were calling it speed-MATH-ing. I also noted we were not emphasizing speed.

I gave each student a card and told them they were to become the expert on that card. Each student checked their answer with me (these cards didn't have QR codes). I told them to make sure they could explain how to work that problem (we were simplifying expressions) to another student.

After each student assured me they understood their card, they traded with the person sitting across from them. They were given a bit of time to work their partner's card.

They checked their answers with their partner. 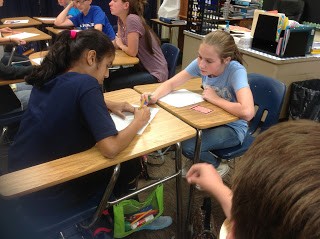 When everyone could work their partner's problem, they got their card back, and one side of partners moved seats.

After everyone had partnered with everyone in their set of 4, a row from each set traded places. 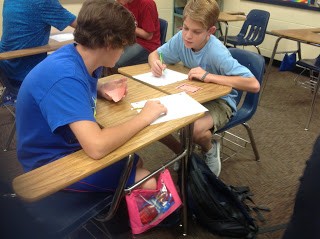 The activity was a success. Students said they enjoyed it. They liked changing partners frequently. I think being the "expert" on one card and knowing their partner was an "expert" on the card they were working on boosted confidence. The activity was no-risk.

There were a couple of small issues I would still like to work out. Timing was still an issue with my Pre-Algebra classes, even though I tried to accommodate for it. Splitting the classes into two sets meant some students never partnered with each other.

I'd like to be able to arrange the room into one large row of desks, but I'm not sure I have room for that. I might make a U with the desks next time?

I'm thrilled I finally got to try speed-math-ing. I will definitely use it again with a couple of modifications.

My name is Mickie Gibbs, and I have been teaching eighth grade math at Arab (pronounced A-rab, long "A") Junior High School in Arab, Alabama for 10 years. I began my teaching career at Arab High School in 1993, teaching algebra and geometry. In 1999 I chose to stay home with my then-one-year-old son, while still teaching part-time for Snead Community College. In the five years I was home I had my daughter. I unexpectedly returned to teaching in 1994, and now I can't imagine doing anything else. I teach inclusion Pre-Algebra, Pre-AP Algebra 1, and I coach the Algebra Team and sponsor the AJHS Junior Beta Club. The purpose of this blog is to allow for reflection as I embark upon the journey of "flipping" my Algebra 1 classes.