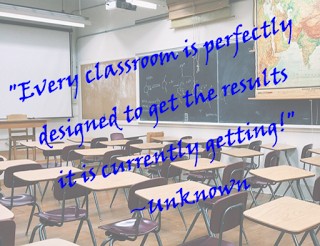 Have you ever given thought to the idea that the design of your classroom provides students a first impression upon what your class will be like? Desks in rows, all facing the front of the classroom tells them strict, rigid, and boring. Desks in pods, central focus, and teacher station up front tells students group work is expected while also paying attention to teacher up front. For some this is intriguing, while others will feel scared and anxious. If we want students to believe that learning can be fun, that learning is about the journey and not the destination, then we need to strategically consider how we design a classroom setting that fosters engagement and participation.

The design element to my Flipped Classroom was essential in aiding the expectations I had for student learning to occur. There was NO front of the classroom. A teacher desk/station did not exist. There were very few desks in the class, much less any structure to how they were placed. My classroom looked like your neighborhood coffee shop - high tables with stools, couches, student art work, and chaotic layout. Students first impression on day one was a little confusion quickly followed with a smile. Three elements that were essential to this dynamic shift in student perception were flexible seating, work stations, and white board tables.

As a caveat, substitute teachers disliked my classroom upon first entrance. I did not use a seating chart - I do not believe in telling students where to sit! Students were well aware of my expectations for class and quickly became aware of whom they should sit by and whom they shouldn't. There were stools, comfy chairs, couches, singles desks, round tables, and rectangular tables for students to choose from. If a student needed some individual work time, he/she knew to find an individual desk. If they needed some additional help in tackling the video lesson and practice sets, they would often sit with peers they trusted. If they wanted to sit or lay on the floor, then so be it. My goal wasn't to restrict their seating arrangement and force them to be still. I wanted them to be comfortable and able to focus on learning! 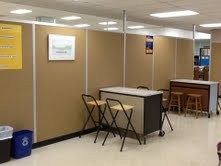 Eventually, this lead to having designated work stations throughout the room. There was a spot for "oops, I forgot to watch the video lesson." This had headsets, iPads, and paper for note taking. There was a round table for challenge problems...I think I got this topic, let's try something harder. There were two areas for "Help! I need somebody" where students could converse with each other about practice problems and seek out the teacher for advice. These stations ended up providing a functionality I had never planned for. Students became flexible and honest in their individual needs for learning - a transfer of ownership had taken place. 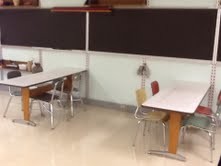 Both of these elements really led to the final element taking place. And honestly, this final element happened by student mistake. One particular work day, two students were working collaboratively on the floor. They were discussing and sharing their thinking for solving a set of math problems. Out of nowhere, they began drawing their solutions on the floor with an erasable marker. Thinking nothing of it, they kept going at it. When I initially saw them, I was shocked. How in the world could you think that was acceptable. They both looked at me with a smile and calmly said, "Don't worry...we tested to see if it would come off easily first."

I was faced with two decisions. Come down hard on them, laying out the law of the land. Hopefully, by reading this post you can tell that isn't quite my style. Rather, I applauded the students for thinking outside the box and working so well together. I thanked them for trying it out first, and then asked them if they thought there might have been a better approach to trying the markers on the floor. They looked, nodded, and said "maybe we should ask for permission next time!" While I can only assume they learned their lesson, I gave their experiment a little bit of thought. Could this be a viable option that would encourage students to show their work and share their thought processes?

Like many educators do, I decided to beg for forgiveness rather than permission. I sought out my two experimental students for help in deciphering which desks the dry erase markers would work on and which it wouldn't. I wanted to recognize them for the creativity and empower them to help me make the classroom better for all. Low and behold, nearly every surface in my classroom was 'erasable'. Over the course of the next few weeks, students were grasping for markers and even bringing in their own. Classroom discussions increased in context and length. Students were eager to share and show others what they did to learn. Further, students began to seek out additional ways to submit their practice problems to me as their teacher. "Can I snap a few pictures and email them to you?" "Could I put the pictures on my blog and share the link?"

The creativity and innovation I witnessed from students was remarkable. Students were not afraid to try something and fail at it. They knew there were resources at their disposal to be successful - fellow classmates, video lessons, and their teacher. Ironically, the fewer rules I gave students, the more they felt the freedom to be kids. They knew the ownership of learning fell solely in their hands. And they were quick to run with the responsibility and embrace their own individual uniqueness.