Yes you can flip and entire school, even if only temporarily, and create lasting benefits and change!

In the last six weeks of last school year district administration hired a new high school principal and announced that the junior high and high school were going 1:1 with Chromebooks.  Additionally, it was also announced that a seemingly far-fetched idea of adding an RtI coordinator/data management/academic liaison position and reorganizing the daily schedule for both the junior high and high school affecting 1200 students put forward by a teacher and admin committee would become a reality.

Although the district had previously been working to upgrade the infrastructure and teachers had done some Google training, these were massive changes with a very short headway very little training. 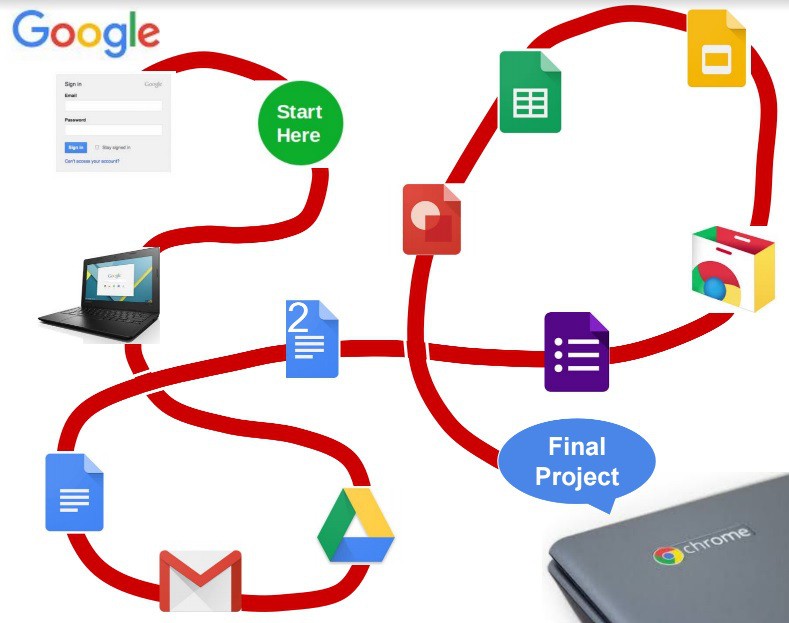 The answer for us was creating a four week flipped learning plan to introduce Chromebooks, student choice, new RtI interventions, a new schedule, and elements of standards based grading and mastery learning. The training is a map that organizes the training into modules that usually include an instructional video, a short quiz, and a mastery demonstration, culminating in a large mastery project. Click here to access the fully functional training, once open just click any icon to access the training. Click here to read all the details about the plan and its creation and purpose discussed in Part 1 of this series at the Flipped Learning Network.

The Goal in my mind was three fold:

1) Provide universal training for students AND teachers on Google Apps and Chromebooks.

2) Use the opportunity to immerse teachers and students in a successful form of flipped learning. 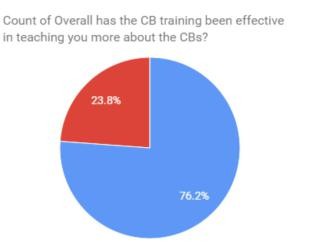 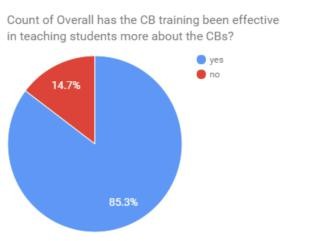 I did an input/feedback survey and as seen in the graph above, 85.3% of teachers felt that overall the Chromebook training was effective in teaching students more about Chromebooks and Google. To give context to that result it is important to remember that from the teacher perspective there was little warning and unclear expectations for usage in the classroom.  We felt that 85% was a big win. Likewise in a high school survey of 600, 76.2% of students felt the training was effective. To see other great summary graphs from our survey of students and teacher click here.

“What if they don’t watch the videos?”

NO GRADES were assigned for the training, but all students in the high school and junior high participated in the training during our new Focus Period. The exceptions were AP science students based on lab minutes, and vocational or college cohort students based on half day scheduling but they participate in the training and incentive plan voluntarily.  Basically, the training was done as an In-Flip with students doing the videos and tasks in the classroom.  The teachers in particular were very worried about teaching in a system with no percentage or letter grade attached and for a few teacher this remains an area of frustration. The worry was what every flipped teacher has heard before “What if they don’t watch the videos?”

No Grades but High Participation

Survey says…55% of students watched all or most of the videos with an additional 18% watching the majority of videos.  As an experienced flip teacher, I was thrilled because some of the videos were very very basic as we were trying to cater to all training levels across six grades (freshman through senior were surveyed) and some of the students simply did not need to view them all. I was especially pleased when I ran the data and found 78% had successfully completed all of the short knowledge quizzes with another 13% successfully completing almost all of the quizzes. At 92% that is also a win. This is supported by 68% completing all the small mastery tasks and 87% completing the majority.  Participation was encouraged by collecting “arrowheads” (based on our school mascot) that were entries into a prize drawing at the end of the four weeks. Entries were given for every correct quiz answer, successful mastery of various topics through tasks, and finally by completing a capstone project based on student-teacher agreement.

In the end, students AND teachers felt they received consistent and quality training. The flipped learning methods were effective in delivering consistent content to 1200 students plus 75 teachers while significantly reducing the amount of preparation required for staff allowing a form of joint learning for students and teachers.  Finally, a very traditional building was able to move beyond the points and the letters to learn something and experience a climate of much broader student choice and variety.

Now for the  “Mostly” part.

I had intended to open then entire map all at once, but concerns that some students would race through the training and become behavior problems meant that we opened a new level each day. This worked fine as students could always go backward, but they could not run far ahead. It was my new principal that wanted to use this inaugural curriculum for Focus Period to establish the expectation for students and teachers that we intend Focus Period to be an active learning period not simply a study hall. Once students had completed the training we used the district’s parent email system to release the fully unlocked map for parents (Click here ).

Soooo…the chat window in Google Docs is cool for student to teacher communication and student to student communication in small groups but I can tell you from experience now that 400 or so kids chatting at once destroys the productivity. Because I built the whole training in Docs and all students were sharing the same Doc they all had access to chat. Apparently that cannot be disabled in Google Docs, so our solution was simply to download the doc as a PDF and use the PDF link.  Students saw the same page and all the links were still active and clickable (one click rather than two in fact) but there was no chat.  That was Day 1, click here for more to that story from Part 3 of this series.

Thankfully most of the technical difficulties we experienced were minor and could, for the most part, be addressed. Putting up to 800 students on one document at a time is like a frontal assault on your network and we quickly found the flaws in the infrastructure.  Our solutions included more access points, teaching students how to refresh and reload content on their Chromebooks, replacing the few defective devices out of the 1200 we handed out, and making bandwidth throttling adjustments.  The other issue was Chromebooks with no battery power from sitting in their organized stacks for handout so long before school started. Overall, it was workable and only put us a day behind, while ferreting out issues before they affected classroom instruction.

Because we were releasing levels on a daily basis as explained earlier and using the PDF format it meant that every update was a new URL.  This meant at the junior high the tech coordinator simply emailed all teachers the daily link.  I wanted to maintain the continuity of a universal one-click access so my co-worker came up with a great idea to solve my problem. We set up a simple webpage on the district website that stayed constant with a graphic that allowed us to update the training URL with know one being the wiser.  this worked out nicely as students could simply bookmark the site and when we pushed out the final parent version we simply used this website with the final version.

As all flip teachers know, too much is not a good thing. Even as an experienced flipped teacher I had trouble keeping my videos under the 10 to 12 min mark.  I would consider that too long in my math class but given the nature of the training and breadth of material I considered 10 to 12 minutes to be acceptable.  The tech coordinator I was working with did a great job on his screencasts but his were a little longer in some cases.  Between the video, the quiz, and the demonstration task we pushed hard against the 25 minute Focus Period time slot.  The solution was built in by our new academic liaison when she lengthened the training from three to four weeks to put in a Check in/Check out day each week to establish a long term conferencing practice.  The extra day each week allowed students who were behind to catch up or spend more time being creative.

Since the training was based on an incentive system, but was rolled out with little headway and a new principal, there were zero dollars in the budget for an incentive program.  Undeterred we announced the incentive program to the students and left it non-specific.  The principal beat the bushes and scoured accounts for money, even searching the leftovers from last years lost and found for money left in pockets before the clothes were donated ($40 total) to make good on our promise.   The principal, with help from the community, made good on our promises but it would have been more effective if we would have had a defined and visible incentive.

I am very proud of and thankful to my co-workers for taking a lot of change in stride, learning a lot of new tech, and being patient with a good but not perfect flipped training curriculum. In part 2 of this blog series I expressed my frustration of how much teachers and students have in common; waiting until the last minute, being obstinate seemingly on purpose, not being the best listeners, etc (click here to read).  All of those things are still true but one way we tried to address concerns and find solutions is to do a midway survey of all staff and students to give them a voice and input.  This was in addition to regular email updates and reports on how we addressed the issues that surfaced. Just like a flipped classroom, flipping an entire school means a focused effort on communication.  Sometimes that communication is criticism and hard conversations about classrooms but to everyone’s credit the patterns and process established in this training program have laid the foundation and smoothed the way for how our Focus Period has continued now that we are two months removed from the initial flipped component.

There are quite a few lasting changes flipping the entire school…temporarily has left behind.

1. It helped firmly establish that our new Focus Period was focused on instruction and active learning not study hall or socializing.

2. The well defined and The flipped Chromebook training bought teachers four weeks to prepare curriculum they would have to create as grade level teams.

3. Students and teachers have a universal reference and language for using and communicating about our 1:1 devices.

4. The “Arrowhead” incentive program has been redressed to appear more traditional but remains a marking system/incentive system that we continue to use for accountability without “grades”.

5. It has increased integration of technology in the classroom and has produced interest in teachers considering the flipped classroom.

6. Finally, my favorite part is that students used their device within the first month to produce and create content to showcase their learning and when students are doing the creating and the teaching then we have truly accomplished something lasting.

Project #2 Basic slides but I love the honesty