OK ... so this is not a typical classroom blog post.

It's not about flipped lessons or classroom activities or student reflections.

It's about trips to the bathroom (and trust - ed.). 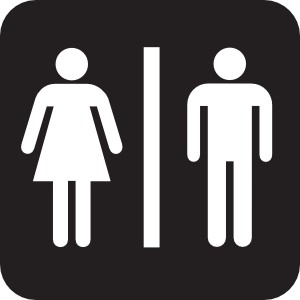 For as long as I can remember (at least since I've been teaching at the Junior High; I don't remember what I did when I taught at the High School) I have given students "bathroom" or "hall" passes. Three a grading period.

Use them for whatever you need - go to the restroom, get something left in a locker or other classroom, as a tardy pass - and if you don't use them, I'll give you up to ten points on a test at the end of the grading period.

I think the passes served the purpose I intended. Students - for the most part - didn't leave class unnecessarily. They thought twice before asking to leave. Ten points on a test is not an exorbitant amount; it would often bump those 79s or 89s to the next letter grade.

Getting the passes ready for students (I gave them three paper passes to keep up with) each grading period was a pain.

It began to bother me that I was giving points for something that had nothing to do with what a student learned. I justified it by telling myself students who never left my room must be learning at least ten points worth of stuff that those who left my room didn't, but...really?!?

I began to consider dropping my hall pass policy.

But ... what if kids abused my lack of bathroom structure?!?!?

I decided to take the risk.

Do you need to go to the restroom? Go.

Do you need to run between classes to get something you forgot? Go.

Are you a couple of seconds late to class? Welcome.

Are kids constantly in and out of my room? No. In fact, even WITH hall passes, I could always tell that a lesson was failing to hook kids if requests to go to the bathroom spiked. When class time is enjoyable for kids, they don't ask to leave the room.

There are a couple of kids who ask to use the restroom several times a week, but they don't seem to be abusing the fact that I let them go. I figure I'm the teacher who doesn't require a pass to go, so they ask.

I had one girl who was being consistently late to class. I talked to her about it, and she's now on time.

It's interesting to me that the type of kid who would burn his passes quickly and then still ask to go (yes, there was a type) rarely asks to go at all.

I wasn't able to give the "You have your hall passes" answer when kids asked for extra credit (but they are still allowed to correct and redo most of their graded assignments, so I still don't give extra credit), but I feel better knowing my grades continue to be a more accurate reflection of what my students know, not how compliant they are.

So ... I did away with hall passes, and my middle school classroom didn't fall apart.