--Originally published at Flipped Learning in My Beginning German Courses

My department at East Carolina University is called the Department of Foreign Languages and Literatures. There are hundreds more similarly named college departments in the world. All of them help cement a perception of a field divided: on one side, one may say, stand the foreign languages taught as a skill instrumental to communicating; on the other side reside (often canonical) bodies of foreign literature that are read and interpreted as repositories of cultural memory. As the Modern Language Association noted in 2007,

"This configuration defines both the curriculum and the governance structure of language departments and creates a division between the language curriculum and the literature curriculum and between tenure-track literature professors and language instructors in non-tenure-track positions. At doctorate-granting institutions, cooperation or even exchange between the two groups is usually minimal or nonexistent. Foreign language instructors often work entirely outside departmental power structures and have little or no say in the educational mission of their department, even in areas where they have particular expertise."

One of the distinguishing differences between learning to read, say, a poem in a language class versus the same poem in a literature seminar is the focus on critical thinking. The poem may be used in the language class because it employs a lot of grammatical structures that are being studied in a chapter; sometimes it is evoked to illustrate a cultural topic that "garnishes" the chapter, such as Ausländer in Deutschland [foreigners in Germany] or Fernweh [longing to travel]. Language learners may distill phrases from the poem and use them to communicate with each other. The same poem, however, when read in a literary course, may serve as an object of inquiry into pressing socio-cultural questions or historical intellectual developments; it most likely will be analyzed, evaluated, and maybe even showcased in a research paper.

We can evoke the revised version of Bloom's famous taxonomy of educational objectives to visualize the binary nature of language versus culture instruction: skills on the bottom, intellectually enriching engagement on the top: 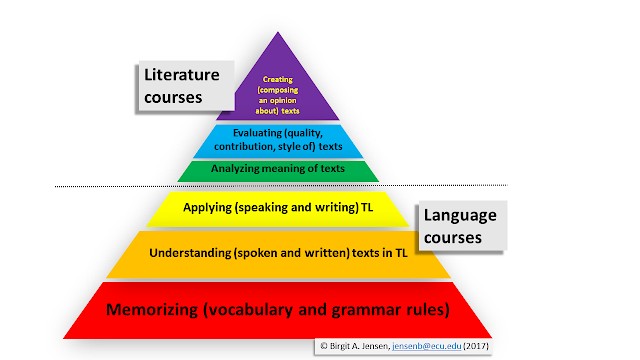 As the MLA concluded in its report, "this two-tiered model has outlived its usefulness and needs to evolve." What I find particularly alarming is the neglect of critical-thinking instruction in the lower division courses. First of all, such an omission reduces L2 learning to mere "mechanics," and it robs students of the opportunity to practice cross-cultural analyses and evaluations that could help inform their language production.

Flipped learning can help infuse L2 instruction with all of the educational objectives in Bloom's taxonomy, ushering in learning that brings about translingual and transcultural competence, two goals advocated by the MLA:


The idea of translingual and transcultural competence, in contrast, places value on the ability to operate between languages. Students are educated to function as informed and capable interlocutors with educated native speakers in the target language. They are also trained to reflect on the world and themselves through the lens of another language and culture. They learn to comprehend speakers of the target language as members of foreign societies and to grasp themselves as Americans—that is, as members of a society that is foreign to others. They also learn to relate to fellow members of their own society who speak languages other than English.

How can flipped learning do this? By allowing the instructor to move the grammar explanations, vocabulary exercises, and readings of cultural texts into the individual learning environment so that class time can be used to use the language as the mere tool that it is with which to experience the culture, to discuss it, and learn from it. 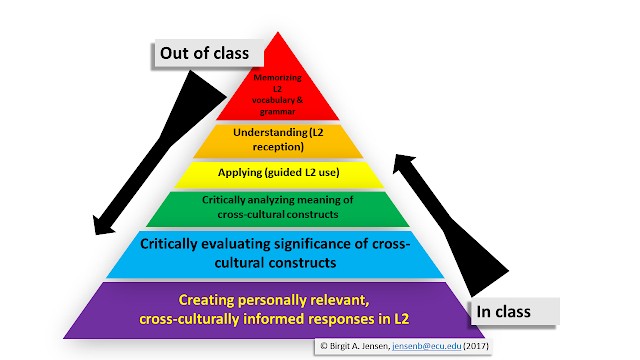 My second-semester learners are currently comparing U.S. American and German patterns of consumption, investigating why Germans have sales-free Sundays and no credit card debt, how the recycling mentality has shaped German views about environmental resources, and what mental health has to do with excessive materialism. They are using their albeit limited German to practice shopping dialogs and to act out scenarios involving merchandise returns. But by the day they are assessed on this unit, each group will have worked out an undergraduate research poster that explains the German and American approaches to function and form, or, stated more concretely, the difference between using three pairs of practical, well-made shoes versus owning twenty pairs of cheap footwear.

The binary structure created by this comparison is one they can then overcome, if they so choose. But to grasp the difference between judicious and frivolous consumption, they have to first become acquainted with alternate ways of consuming, with different "normals." And that difference they won't encounter by simply memorizing vocabulary lists and grammar rules.

Birgit Jenson is an associate professor in the Dept. of Foreign Languages and Literatures at East Carolina University in Greenville, North Carolina.