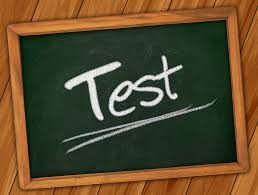 As this school year comes to a close, I keep thinking about an area of transformation I want to continue to explore: testing.

Two things have led me to change my approach to testing:

I guess the first change to testing began several years ago when I began using interactive notebooks (INBs) with my inclusion Pre-Algebra classes. I've always allowed those students to use their INBs on tests. It has been important to me that they learn how to use available resources to help them with a task. I also found being able to use their INBs greatly increased the confidence of these students.

I've been a little slower to change with my Algebra 1 students. My thoughts? They're advanced kids. They need to be able to take big, scary tests independently and using only what they stored in their own brains.

As other aspects of my classroom have changed, though, my thoughts on testing have begun to change, too.

One thing which I've used in the past but began to use more consistently this year is "reference sheets." I really don't have a great name for them; the kids like to call them "cheat sheets," but since they're allowed to use them, it's not really cheating. Part of my motivation for allowing the reference sheets was the "real world" argument - outside of a classroom, students will be able to look up any information they need. Why not allow them something similar during a test?

Sometimes I gave kids a graphic organizer to help them organize their thoughts for a test; sometimes I allowed them to make one however they thought would be most helpful. Most of the time they told me they wanted some structure and guidance.

The kids appreciated the reference sheets. For me, it was a not-so-sneaky way to get them to prepare for a test. It gave them confidence and helped to lower their anxiety about tests. Some of them were very adept at making themselves reference sheets; others needed more direction. I was always amazed at the number of kids who would neglect to create a reference sheet when given the opportunity to do so.

The other idea I've been toying with for a few years and tried some this year is cooperative tests.

My kids work together a LOT. Almost exclusively. They learn from each other, refine their understanding as they interact, and create that beautiful music to my ears - math talk.

I first attempted a cooperative test early second semester. For solving inequalities, I gave a "Choose Your Poison" test where students chose two out of three problems per section and were able to check their work since different problems had matching answers.

The test was challenging - which was a good thing - but students needed more time to complete it.

I gave more cooperative tests throughout the semester; most of them included some sort of student choice about which problems to attempt.

I like cooperative tests. They're less stressful for students. They reinforce all those skills of cooperative learning mentioned previously I adore. The contribute to the student-centered classroom I continue to strive to attain.

I do have some concerns.

What about the students (a small handful, but they do exist) who "ride the coattails" of their classmates and don't really know the material?

Am I hurting students when they DO have to take tests independently, like tests in future classes or standardized tests?

I think the ability to take a test independently is probably a non-issue. Students get plenty of opportunities to take tests like that. And there are some things - skill-based topics, for example - that lend themselves to independent tests.

As far as ensuring an accurate demonstration of each student's learning - something that's a continual area of focus - I think the type of task would be important. Deep, rich tasks with multiple entry points and ways to solve? Something to continue to ponder....

OK...this post ended up being longer than I intended, but I wanted to get my thoughts about testing in writing before the brain officially turned off at the end of this coming week (in all honesty, it's mostly off already). Continuing to reform assessment in my classroom will be a focus next school year.