Oh gosh it pains me to share my first flipped video lesson, but here at F.A.T. we are all about the transparency.  No, don’t watch! Look away!!!

How did we get here? It’s all my content partner’s fault.  At the end of my first year teaching social studies with her (after 8 years as the ELA teacher on her team), we felt frustrated that our year-ending Civil War simulation unit felt so clunky. There was great material in the unit, and high energy on our end, but the information delivery was ineffective. We had a similar frustration earlier in the 19th-century units, as we provided independent research opportunities that sometimes fell flat. Students need basic information before they can dive into inquiry, or else they will travel misleading paths and down dead-ends. Remember we have 85-90 students each, so we cannot directly monitor every students’ progress on home-based projects. Independence was a serious goal for these 13 or 14 year-olds, but how can we help them achieve it?
My colleague found the classic Bergmann and Sams book in May 2013. I ordered it then, but didn’t get to read until the summer. I have vivid memories of reading that book on the front porch of the apartment where we lived back then, shouting out loud “YES!” and “Oh my god!” and probably other agreements that I should not publish.  We met a couple times in August to share notes about how to start the year: with video lessons instead of textbook-based assignments. She made the Powerpoint slides, and I used the free version of Screencast-o-matic to produce the first video.
I also have vivid memories of recording that first video: inside my Ford Taurus with my school-provided Macbook, in the parking lot while my son was in fencing camp. Actually the inside of a car has great acoustics for audio recordings, as long as nobody honks a horn or slams a door right next to you….

I generally regret the first video lesson quiz we gave, partially shown below. That was a rush job, and we made it AFTER producing the video. That’s the wrong way around!! One of many lessons I had to learn the hard way, but made me a better teacher in the end…. 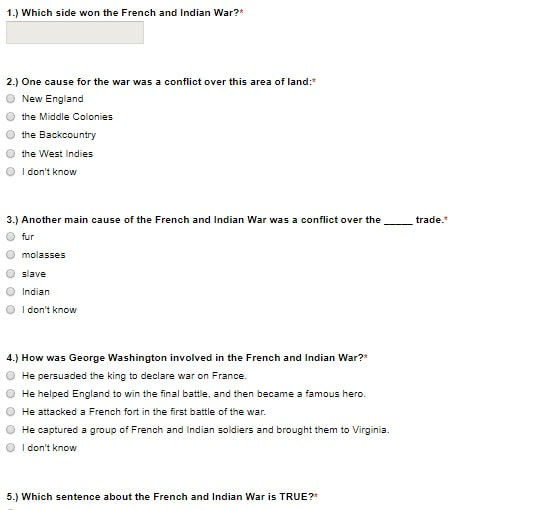