Originally posted on c21teaching.com on 23 November 2016.

After attending a masterclass with Jon Bergmann (@JonBergmann) at FutureSchools in 2015 (review articles here) and the subsequent FlipConAus on the Gold Coast later that year (review articles here), I was excited to get to be attending this year’s Flipped Learning conference in Adelaide. It came at a good time for me personally, with the preceding few weeks having been very stressful for a number of professional and personal reasons. The storify of the leadup and day one of the event has been storified, which you can find here.

For me, the trip to FlipCon began with a train trip, a long wait (not to be confused with the long weight that many apprentices have been sent to get from the hardware store) at Sydney Airport with an overpriced lunch, a flight which involved a random conversation with the two passengers sitting in my row on the plane and then randomly running into Heather Davis (@misshdavis) and her entourage at the baggage collection. We all ended up going out for dinner together and it was a great way to get to meet some new people beforehand as well as being a nicer way of spending the evening than dinner alone and getting some work done in the hotel room.

Adelaide for #FlipConAus. So far everything about this rules. If anyone wants a beer tonight hit us up. #howisthiswork? #FlipConADL pic.twitter.com/tJkVrjFVoZ

The actual conference began with a welcome address from Val Macauly of organisers IWBNet and the Principal of hosts Brighton Secondary School, Olivia O’Neill.

Following Olivia was Rupert Denton (@rupertdenton) of Clickview who spoke about the need to make technology educational, rather than make education technological. It was an important distinction and one which he spoke passionately. It is, I have to admit, the only opening address that I have heard where the Cambrian Explosion and the Cambrian Extinction have been so seamlessly woven into the talk.

For those of you who have not heard of the Cambrian Explosion, it was a twenty to twenty-five million years period of time in which the vast majority of animal species originated. He likened the current period of educational technology to that period of time as it seems that there is a new toy, app, gadget, tool or technological pedagogy emerging and becoming a favoured flavour every other day. There was competition for food (teachers to use the product), competition for resources (schools to use the product school-wide rather than a single teacher) and competition for growth (developers to create more apps, gadgets etc). The clear underlying message of Rupert’s address was captured succinctly.

Rupert exhorted delegates to critique the value of technology which purports to be educational and question what is it that makes it educational? If you follow Rupert’s analogy vis-a-vis the Cambrian Explosion to its logical conclusion, there must be a Cambrian Extinction event looming on the near horizon.

The distinction is important, as it feels like education is being made technological sometimes, rather than making technology educational. I hear complaints from colleagues both in my own school and from other schools that it feels like there have been more fads in education in the last five years than in the preceding ten, particularly as technology in our daily lives becomes more ubiquitous and companies realise that by promising much, they can sell even more. This sounds like a similar line of thought to the digital natives vs digital immigrants discussion to me. It should always, however, come back to the pedagogy and the good of the students’ learning.

After Rupert spoke, Jon Bergmann was up to deliver his keynote address. Before he did that, however, he mentioned that Battledecks (or PowerPoint Karaoke as it is called in my classroom) would be on again at the social event. Along with that, to ensure that everyone was up and fresh for the day, Jon also mentioned that he would be holding a FlipCon 5k event starting from Glenelg Pier the next morning. 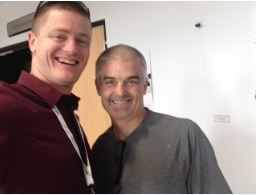 It was good to catch up with Jon again

I have to admit that I was not sure how much value I would receive from hearing Jon speak. Not because I feel that I know everything about flipped learning, I most certainly do not, but because I had heard him speak about flipped learning on a number of occasions prior to this and I was not sure how much of what he said would be new. The initial stage of his keynote was mostly familiar content, however, the middle and latter stages held some new nuggets of ideas for me to consider. Jon spoke to the concern about replacing teachers with YouTube videos that is often levelled at flipped learning as a pedagogical strategy by reminding us that our value as teachers and professionals is not in our information dissemination but in our ability to analyse and deep dive on a subject with our students so that when they resurface, they have gained a new understanding for not just the surface understandings but the more nuanced subtleties of the topic or skill. I saw the below tweet by Jeff Atwood this morning and it resonated very strongly with me along this same theme.

Digital literacy never should have been about 'coding' — we need to teach "don't believe things you read on the Internet" first. Big time.

Jon also defined some new terminology as a way of differentiating flipped learning from traditional pedagogical methods and to reframe the discussions around learning activities.

This shift in the framing language of flipped learning should also encourage a shift in thinking about the way in which time with our students is used. It is easy to add to students workload rather than replace the homework with individual learning tasks, however, that is not how we should be flipping, reminding us that flipped learning is not about the technology or the videos but about the reclaiming of our face to face time with students for more meaningful and deeper learning activities.

The reminder was given that we need to train our students as videos are often merely a source of entertainment and that flipped videos should be engaged with rather than just watched. The new tip (though obvious when said) was that we also need to invest in professional development for ourselves and colleagues when implementing flipped learning. I maintain a list of resources, articles, and contacts to start out with flipped learning, however, you can now complete a Flipped Learning Certification course through the Flipped Learning Global Initiative.

Jon shared the top twelve mistakes that educators make and which get in the way of flipped learning success, beginning with lecturing when students have not watched the video. “Do not rescue them from that choice,” Jon told the audience. Making content too difficult or inconsistent to access is another. This last comment can be interpreted in a few ways. The literal interpretation is, I think, fairly clear. The other consideration, particularly in secondary and tertiary education, is that it is not too difficult insofar as students needing to remember a large number of access details with different faculties using a different learning management system. Keep it simple. Joel Speranza (@joelbsperanza) spoke about this during his masterclass at FlipConAus 2015 and reminded us that the learning management system does not even necessarily need to be technology based.

QR codes on a learning outcomes and scaffolded worksheet can be super simple and effective. #FlipConADL

The next mistake Jon said he sees in flipped classrooms that do not work is that the teacher is not active in the classroom after flipping, that they sit at their desk and do not engage with students. This defeats the whole point of flipping a classroom. Following this was giving up too easily. This seems fairly straightforward, as any big change requires a period of acclimation for all those involved and flipped learning is typically a significant change in pedagogy. Another problem consistent in those classrooms where flipped learning does not work is that there is no interactivity in the ILS beyond any notes the student takes. It is important that there are engagement points to ensure that students are actively learning and processing what they are seeing and hearing. There is a range of tools that allow you to do this, such as Camtasia (my favourite), EdPuzzle, and Clickview to name a few.

Quick instant response, ask them to write exit questions, lets communicate the holes in the content #FlipConADL Learning is Knowing

Jon spoke about something that makes a lot of educators nervous and overly self-critical; making their own flipped learning content.

LIVE on #Periscope: Make your own videos. https://t.co/c8J9UxKGR3

Peter Whiting (@Mr_van_W) has recently published a peer-reviewed action research study that examined the impact on student learning outcomes of using flipped learning content created by either their own teacher, a team teacher or an external third party (for example, Khan Academy). I attended Peter’s session where he spoke at length about the methodology, the results and the implications of the research project and I will discuss those findings and my thoughts on the implications in that article. There is a significant reason to create your own videos. You are their teacher and therefore the relationship is with you, not with Salman Khan, Mathantics or another provider.

That said, even if you do create your own videos but do not teach students how to engage with them, you are making another of the more common mistakes that Jon sees. Using a video to learn a concept or skill is significantly different to watching a movie or a music video and it is a skill that needs to be taught taking time appropriate for your context. Lower Primary students might need a number of weeks of learning to engage and reinforcement of how to engage, whilst upper Secondary students may only need one or two sessions.

Mistake #2 "Not getting key stakeholders involved" #FlipConADL @jonbergmann says get students, parents, principal all on board for success.

Although it may seem obvious, not ensuring buy-in from key stakeholders is another common mistake that Jon sees worldwide. It is not just your Supervisors and Executive staff who need to buy-in, it is the parents and the students. One way of achieving this is to have your students and parents from this year record short messages talking about why they like flipped learning as a pedagogical approach. These can be stitched together to form a single video and serve as a hook for the sell to stakeholders.

However, the number one mistake that Jon sees internationally in contexts where flipped learning has not worked:

Number 1 mistake of #flipclass but doesn't have to be all glitz and glamour. At Brighton we aim for lessons that are 'hard fun' #FlipConADL pic.twitter.com/LXTWmjwk3c

Jon then spoke about the continuum of pedagogical strategies and posed that flipped learning sits in the middle of teacher-centred and student-centred, providing a good balance between direct instruction and student-led constructivism. He reminded us that students do not know what they do not know and that our job as professionals is to guide them to ensure that they have the conceptual and skill knowledge

When being in the position of wanting to flip, but not knowing where to start, I would point you to my Starting Point for Flipped Learning page and remind you of how Jon finished his keynote:

If you have made it this far, thank you. I will aim to get the next article out in the next few days. Given the time of year, with everyone busy working on writing their end of year reports and a variety of other activities, I am sure my readers will be understanding of the delay.