If I’m going to be honest, teaching sentence types is not on my list of fav English topics; so when the topic appeared on the syllabus of my new class, instead of dreading the teaching process, I decided to go for an in-class flip (see this post for more information on what this is). Before I get into what I did, let me contextualize. I’m currently teaching an English speaking class to university students in which types of sentences is temporarily in the syllabus. For this lesson I’m about to describe, I had previously flipped the explanation of what simple, compound and complex sentences were. Students had been asked to watch two Youtube videos and to take notes of their doubts.

However, no class is ever perfect. So,  of course, there were students who did not do the task, and I needed to continue with the process in order to focus on the struggling students. Thereby, an in-class flip configuration became ideal here: it would let me keep an eye on the strugglers, let those who knew the topic practice and continue with their learning as well as solve the “I didn’t do the homework” situation of some students. Let me tell you how I did it.

Anyone who has in-class flipped a lesson will tell you that the planning can be a little time-consuming depending on how many stations are planned and the types of activities. However, they will also tell you it was worth it at the end (this is what I have been told from fellow colleagues who have experienced this type of flip). In the end, planning a good class will always take time… it comes with the calling.

For this lesson, I decided to create five stations ( 1 flip and 4 practice stations) with what my colleague @crbuitrago and I have called a loop configuration. This means that the lesson was planned for students to go through all the practice stations regardless of where they had started. The flip station was optional for students who really needed it. This also meant that the activities that I was going to plan needed to have a level of difficulty that all students were capable of doing. To my luck, I found great resources in teacherspayteachers.com and had no need to create any extra material on my own!

Here is an estimate of what the planning of each activity implied for two groups of an average of 22 students each in a lesson of 80 minutes. 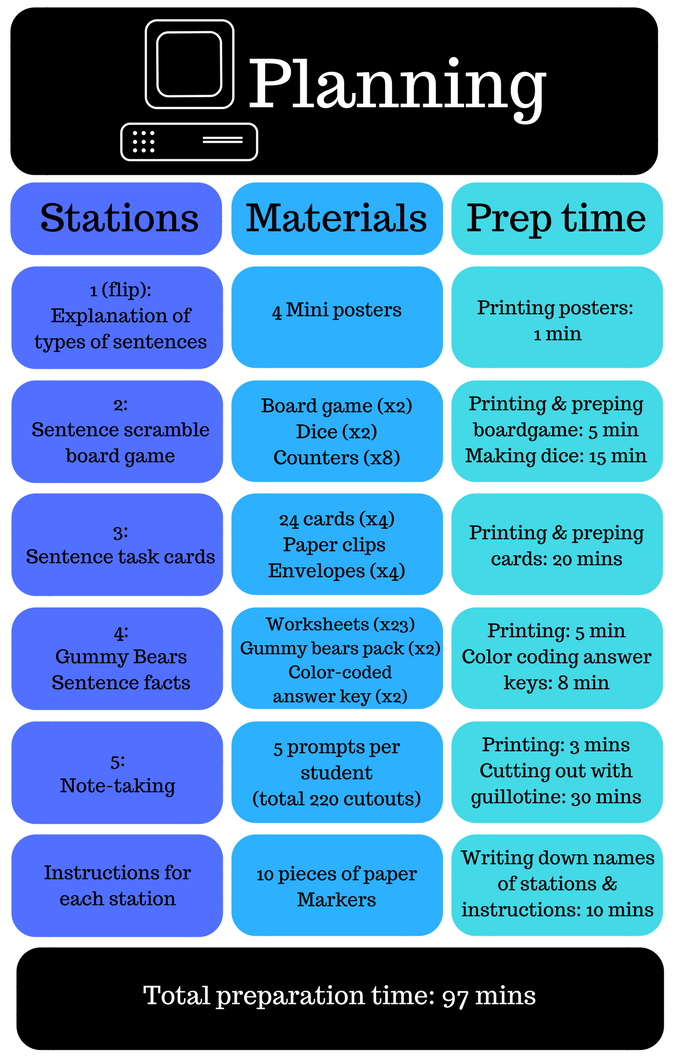 Image made with canva.com

For the set up, I arrived 10 minutes before class. Luckily, my colleague, who had just finished class in the same classroom, offered to help put up instructions on the walls next to each station. Also, as students came into the classroom, they were asked to help arrange the seats, which they kindly did. All in all, the set up took about 10 minutes.

When everything was ready, I gave my students a walk through of each station so that they could visualize the activities they would be working on and understand the interaction and purpose. I only mentioned what each station contained without emphasizing on instructions. I mean, the whole point of thinking thoroughly on how to write each instruction was to avoid having to go over them (some valuable minutes saved here). Moreover, I explained that maximum 8 students could work in each station. I chose this number so that there would always be space for students to move among stations. I also clarified that station 1 (flip station) was available for whoever required a brush up on the content explanation and was there for them to walk to whenever they were in doubt.

This was the set-up: 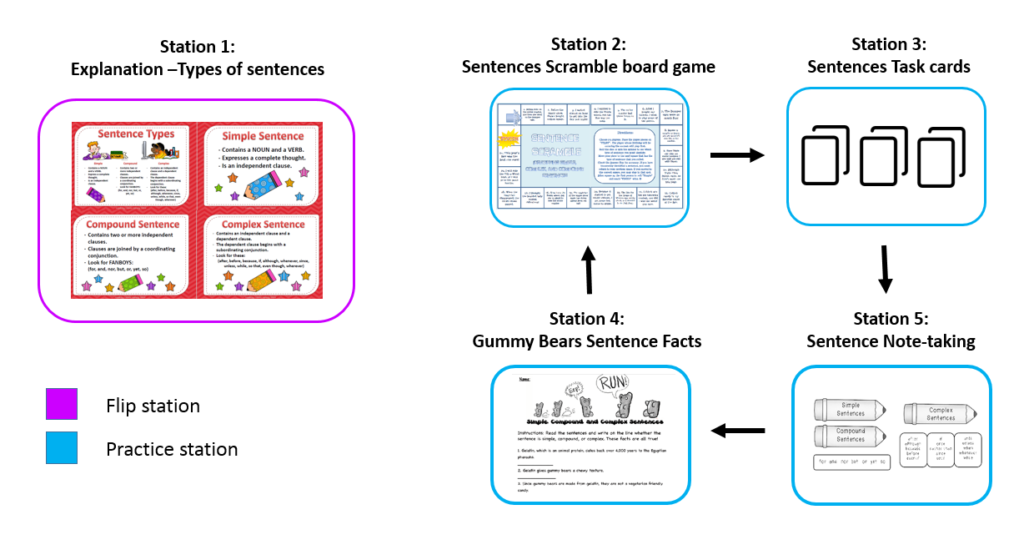 Here is a video of the set-up of this lesson, which was part of an in-class flip workshop I gave last week for English teachers at the Centro Colombo Americano Symposium in Bogota, Colombia:

Here are some pictures to illustrate the set up: 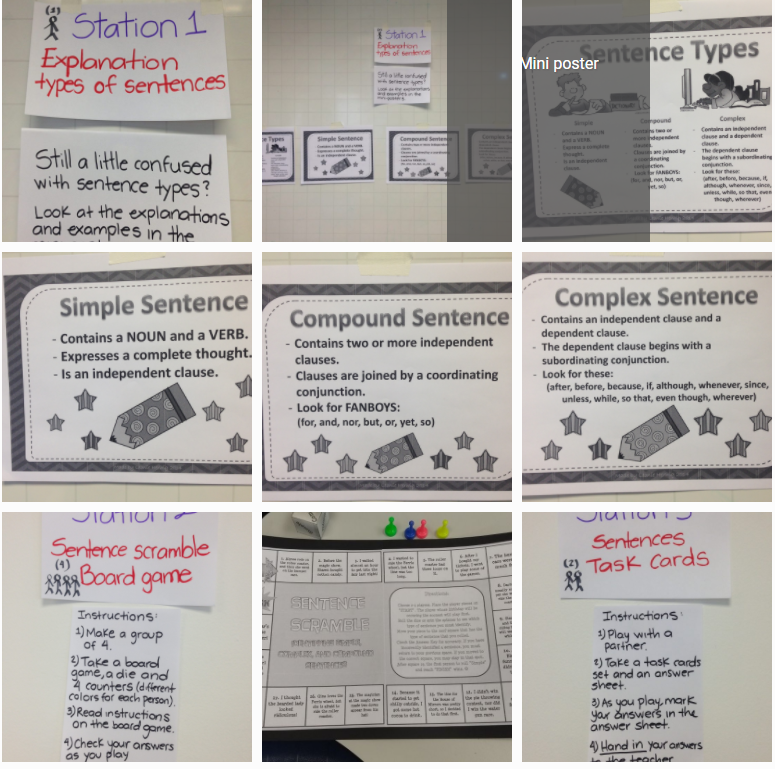 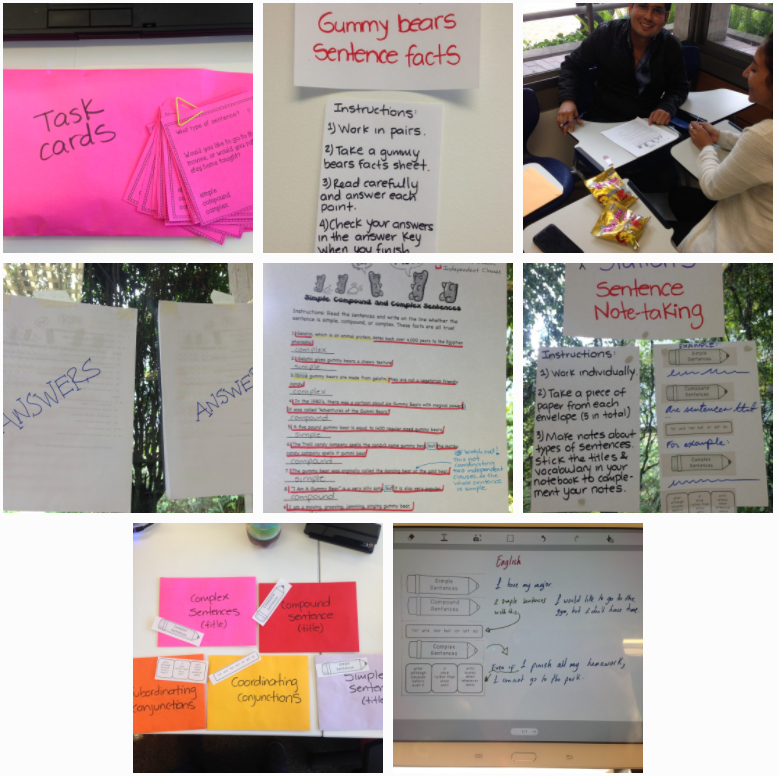 I tried this in-class flip with 2 groups the same day and made minor adjustments.

The in-class flip with Group 1:
With the first group, in order to assign students to a station, I handed out a colored sticky note to each one: red (station 2), blue (station 3), green (station 4) and purple (station 5). Then, I directed them to their corresponding stations. I also started timing the station work and initially set the timer to 15 minutes. Station 2 and 3 took the 15 minutes. However, stations 4 and 5 took half the time, so when I noticed students had finished in both stations, I switched them. This meant that rotation in these stations would be faster, and the switch was an easy solution to the timing situation. After that, I played it by ear and directed students to stations as they finished instead of timing the rest of the stations. I had initially thought students would take the whole class to finish the stations, but about 10 minutes before time was up, students had finished, so that gave me enough time to ask them to provide feedback about the activity with post-it notes.

This is what my students had to say: 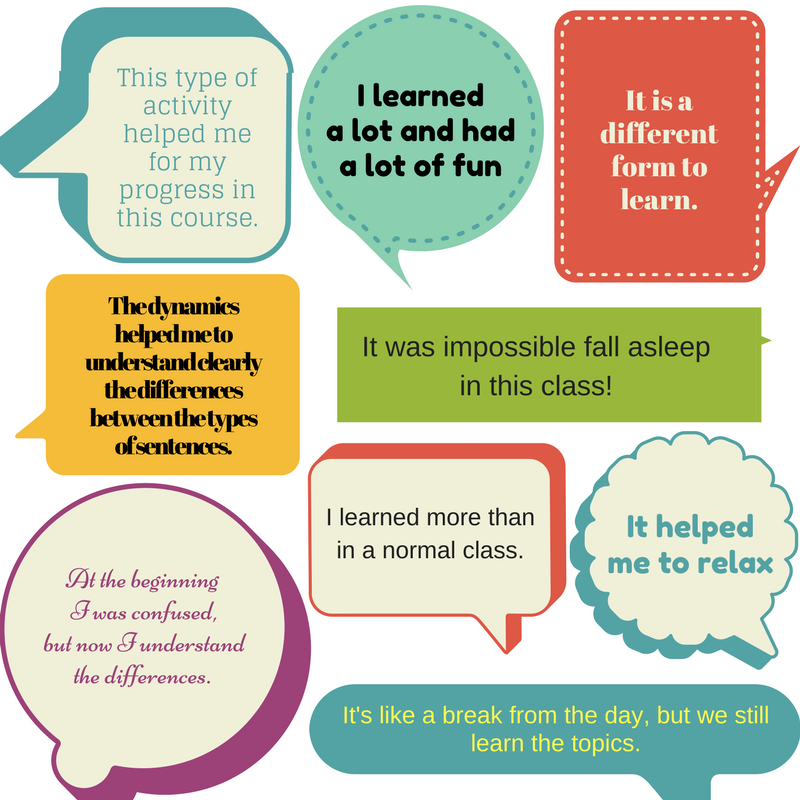 These were the key words they used to describe the in-class flip.

The in-class flip with group 2:
The second time around I did not time the stations. This time, as students entered the classroom, since the stations were already set, they took the liberty to sit in the stations of their choice, so I went along with it and let them start where they had chosen to sit. I also rearranged some students to make sure the stations had the minimum students required for each station. In this group, I had a case where instead of four playing the board game, there were five. Also, in one of the pair work activity, three ended up doing the task. This was due to an uneven number of students, which was not the case of group 1, but also to students finishing faster and wanting to move forward. This meant being flexible with number of students allowed for an activity, which in the end worked just fine as well. With this group, instead of directing students to the stations as they finished, I decided to let them move around freely as long as they kept in mind the rule of “maximun 8 students per station”. In the end, students also finished the rotation before the class ended. Only the next day did I notice 2 students had not passed through station two, saying they did not have time, though they had not said anything the day of the class. In this respect, I believe this was a consequence of giving them the choice to move around at their pace and not asking students individually if they had completed all the stations as I did with the first group. Point taken.

Look at what this group had to say: 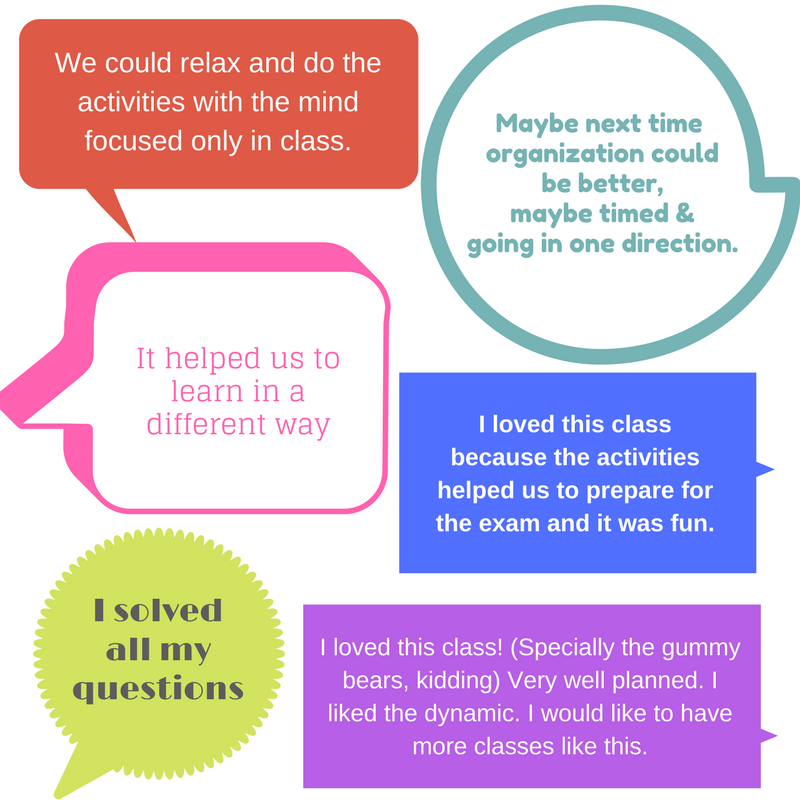 All in all, both groups shared an overall positive opinion about the in-class flip. Nevetheless, in the first group, one student seemed to find the activity boring, so I followed up and asked him why. Turns out it had to do more with the topic and the people he ended up working with than the actual in-class flip dynamic. In the second group, it is evident that the free rotation I adopted was considered unorganized by one of the students, who suggested timing and a one way rotation.

WHAT I NOTICED DURING BOTH IN-CLASS FLIPS

TO KEEP IN MIND

Here are the resources I used in this lesson if you’d like to download them and give this in-class flip a try!