My Field of Dreams

I found myself in a metaphorical and physical “field of dreams” in Iowa July 30th this summer, about 60 miles south of the actual movie Field of Dreams site. I had chased the steam train in the background of this picture from just west of Chicago well into Iowa and was getting a closeup view with my daughter at its final water and service stop of the day before we headed back east. It had been a great day leap-frogging this behemoth across the prairie taking photos and video.  I love trains and all day this fire breathing piece of real estate built during WWII, retired in the Kennedy administration, and resurrected only last month had blown my mind.  However, the highlight of the day ended up being the conversation I had with Austin, the young man in the vest and hard hat. It is his story that feeds into our “All Flipping Summer” theme. 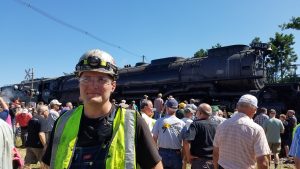 A Comparison and Contrast

At 134 feet long and 17 feet tall from the rails the “Big Boy” #4014 locomotive is massive.  Imagine 3 1/2 school buses lined up ready for students, now stack another line of buses on top of them and you come close to the volume of this locomotive.  Alternatively, imagine looking from the 45 yard line of an american football field and the other end of this locomotive is at the goal line.

I didn’t ask his age, but I would bet Austin was born during the Bill Clinton presidency.

I don’t know how fast Austin runs, but the 68″ driving wheels (all 16 of them) can roll the oil burning, smoke belching, fire breathing, ground shaking, whistle screaming cinder spewing monster at up to 80 miles per hour trailing a mile of freight cars.

It was Austin’s responsibility as Mechanical Foreman to ensure that this reciprocating septuagenarian iron horse ran like a fine watch.

The headlamp on a sunny day and bright safety vest tipped me off to Austin’s likely involvement and employment with the Union Pacific Railroad (UPRR) and the star of today’s show. After thanking him for his efforts and complementing the steam train team for their great work we stood and talked for about 15 minutes about his role with the engine and how he came to be connected to this traveling circus.

Austin is was originally from Colorado and works out of the UPRR Steam Shop in Cheyenne, Wyoming. He started with the company eight years ago as a machinist, having grown up around tractors and agricultural steam traction engines.  This is not an uncommon story for those that work around the country at various tourist railroads and museums.  What is uncommon is his relatively young age and craftsman skill set.  As you can see from the photo, Austin is not afraid to work with his hands, but what might be surprising is how much more necessary it is for him to use his head.

Austin has a degree in mechanical engineering, and it took both his skills and his education allow him to do what he does for a living.  The Union Pacific steam program is the only large railroad funded steam program in the United States.  Each person on the team is an employee of the company, many of whom are full-time steam employees. Union Pacific is in the business of making money and the steam trains are a priceless (nearly literally) public relations and goodwill tool of the company. Austin said that in their 3 day stay in Chicago they brought 50000 people through the display cars and onto company property.  This is a small fraction of the number of people who line the roads and tracks from Utah to Minnesota, Illinois to Wyoming, and onto California their next destination.  This fire breathing display of transportation history is publicity, business, and employee recruiting.

Trial by Ring of Fire

Austin and I discussed some of his responsibilities as Mechanical Foreman on this trip and some of the many things he did to help get this locomotive restored and on track (pun sigh).  He was responsible for working with sub-contractors all over the U.S. to forge and manufacture parts that haven’t been produced since WWII, from blueprints done by companies that have been out of business since well before his birth. Austin talked about using his background and understanding of not only manufacturing and engineering, but of metallurgy. As an example, all 16 wheels were shipped to Pennsylvania to re-tyred (sic).  Yes, steel wheels actually have additional steel tires with different properties of wear and hardness.  These tires are actually heated using a large “ring of fire” gas jet to expand the tire and allow it to be slipped onto the steel wheel where is cools and shrinks, nearly permanently, onto the 68″ steel wheel.  This was just one very specialized process and subcontractor that the steam team worked with to bring Big Boy 4014 back to life.

Racing to The Golden Spike

Another unexpected aspect of Austin’s job was working with and finding manufacturers willing to produce short runs of parts.  Most items ordered by the Union Pacific Railroad and manufactured by heavy manufacturers are measured in quantities of 10,000 or 100,000.   For a project like this there were items that numbers only 50 or in some cases less than a dozen, but without the part the whole project stopped.  With a drop dead date set to get the engine to Utah to celebrate the 150 year anniversary of the transcontinental railroad and Promontory Point this was a race.  Austin talked about test running the engine less than 48 hours prior to leaving for the hundreds of miles journey to Utah. In fact, there are still a few cosmetic pieces missing from the Big Boy due to timing and the desire to get the engine to “work”.

A Conversation Leads to a Great Story

As a flipped classroom teacher, I asked Austin if he would be willing to do a quick interview with me on camera, but in his role as a Union Pacific employee he had to decline.  He did stand for the picture and allowed me to share his story on my twitter and here, but with the UPRR having a very specific publicity plan and department I understand. I may not have video of my conversation with Austin or a podcast, but I have a great inspirational story to share with students about the power of combining skills and education and following your passion.

The tour of Big Boy #4014 is a story of engineering, both mechanical and railroad trade. It is a story of communication, written, visual, public speaking, and social media. This is a story of finance as the costs to move this locomotive on their own tracks is astronomical for the Union Pacific in fuel oil, personnel, planning, etc. Every road crossing must be guarded by local police or UPRR employees as well as arranging for water and service to slake the thirst of this beast. In the end, someone has to make sure that all of this makes dollars and sense to the company.  These are just a few aspects of a single railroad program that provides pay and careers to so many people.  This rolling anachronism is simply a public face of a massive transportation company that makes Amazon, Walmart, factories, car dealers, and much of the economy possible. Our students so often limit their career expectations to their limited experience or the careers of their parents. Events and stories like this allow us to engage students and expand their view of possible futures.

Austin mentioned that many of the people he went to college with now work in HVAC or engineering offices, and while that is fine, he much prefers his office at 45 mph with a headlamp and a safety vest.

(I was shooting the real camera, my wife was kind enough to grab this cellphone video)