Originally published on c21teaching.com on 4 December, 2016

“We put finished works up, but how often do we put up work / learning in progress to model that learning is an ongoing process?”
–Ryan Gill

After listening to Peter Whiting (@Mr_van_W) speak about his action research (which I wrote about here), I settled in to hear Ryan Gill (@ryanagill) speak about Delving Deeper – developing critical and creative thinking in flipped classrooms. I was curious about what I would here in this for two reasons. Firstly, I had not been in the room for part one, but the twitter conversations I had seen looked very interesting.

The other reason I was interested was that critical and creative thinking are two characteristics which are firmly embedded in the Australian Curriculum and are spoken about by some as being twenty-first century skills, which gives me the impression these people are being either facetious and acknowledging that there is in fact nothing new about them whatsoever, or they are utilising them as buzzwords (click here for buzzword bingo…great for your next staff meeting) and are ignoring, again, the fact that these characteristics or skills have in fact been around for millennia.

Ryan began by discussing his journey through Visible Thinking and Cultures of Thinking and providing an overview as to what they are and how they are related to his flipped class journey, which has been ongoing with Year Eleven and Year Twelve courses for the last four years at Masada College. What Ryan was telling us about Cultures of Thinking and the handouts he provided us with looked and sounded very similar to what I heard from some presenters during the Teaching for Thinking forum I attended last year (read those articles here) and that

Cultures of Thinking originates from Project Zero at Harvard Graduate School of Education and makes explicit a range of thinking routines that fit into different contexts and have a different thinking move appropriate for that routine. The routine chosen is contextual, with pedagogy being the driving tool behind the routine chosen. Ryan made it clear that many of the thinking routines are already being used by teachers, however, they do not necessarily think of them as routines but as a strategy for student engagement. Cultures of thinking makes explicit the thinking that teachers are asking students to do, enabling teachers to explicitly teach students’ strategies to think more deeply about their learning. An example that Ryan provided was to use a thinking strategy such Zoom In rather than asking the class a few questions. As he reminded the group, no thinking means no learning is going on…are your students actually thinking or are they getting through the stuff?

The language that we use is important. There are 8 cultural forces that impact our classes. #FlipConADL

Ryan next spoke about cultural forces which impact and define our classroom and which are important for our students’ growth as thinkers and learners. Ryan said that rich and deep thinking often requires slowing right down and allowing time for the thinking to occur at deeper than surface levels, which is something we do not often do as educators. I have tried to encourage my students this year to not make a guess straight away or to call out when they think they know an answer to a question but to take at least five seconds to stop and think about it and I have to admit that I have not been particularly successful in breaking some of the thinking habits of my students; they still throw their hands straight in the air, even when explicitly told that it is thinking time or brainstorming time. Ryan showed us a video of Debbie O’Hara speaking about using the explanation game as a way of teaching students to think more deeply and more critically.

Retrieved from tinyurl.com/grskxln on 4 December 2016

As a follow on from the video, Ryan asked us to think about the cultural forces that we observed in the video and to consider how they impacted upon the students’ learning. It was a rich discussion with a range of ideas and thoughts. Ryan acknowledged that we all operate within our own context and that every context has constraints handed down and enforced from those hierarchically above us. Within those constraints, however, we should work to create the culture that we want in our class.

The level to which we should allow our students to muddle or struggle with concepts as part of their learning was raised. Ryan spoke about it being an important part of the learning process and that the discovery or Eureka moment is a powerful factor for further learning, engagement and retention of learning. Furthermore, allowing kids to remain in the muddle can foster curiosity, resilience, and creativity. Helping students to remain in a safe muddle, a place of cognitive dissonance) can depend largely on the questions and the language that is used within class discussions, a concept which Jennie Magiera (@MsMagiera) raised during her Masterclass at the FutureSchools Conference this year (read part one here).

Ryan spoke to us about The Putin Principle, though I do not remember the context and asked us to consider the above image, and explain who we thought was correct using a thinking routine called claim, support, question. It was an interesting process and the range of ideas about the veracity of any one position espoused in the Slugville Election was intriguing, and Ryan played the devil’s advocate will a significant amount of delight, challenging the ideas presented by various delegates. The process reminded me of The Obi-Wan Principle: 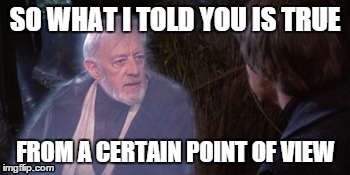 Ryan closed by using a zoom out exercise, showing us a small part of an image to start with and asking us to consider what we can observe and what impressions that gives us of what and where the image is. As he showed us each level of the image, we spent a few minutes discussing as a group our observations and ideas on what we could see and what factors influenced our assumptions about our observations. It was a very interesting process and a clever way of closing out, using one of the thinking routines we had been discussing.

I thoroughly enjoyed Ryan’s session and would have liked to have been able to be in two places at once so that I could listen to Part One whilst I was also in listening to Peter Whiting. If you are interested in learning more about cultures of thinking, I have included links to various resources throughout this article. Additionally, you can get involved with the cultures of thinking chat on twitter using #cotchat or looking up Project Zero. Thank you for reading and I would appreciate any feedback you may have on this article. If you have missed the previous articles in the series, you can find the first article here.